The day is coming when small, unmanned drones will be able to get into areas of underground mines that were – or are – inaccessible to traditional mining methods.

It could be in the ventilation shafts, access shafts, the stopes, drifts or adits, with the drone operators at a safe distance.

And, in some cases, they will be able to be used in mine rescue operations, finding the safest path to rescue anyone trapped underground.

Not too far down the road, they also will be able to be programmed to operate autonomously, scanning with Light Detection and Ranging (LIDAR) to map out the mine workings and uploading the information to be used by the mine operators.

“That’s not 10 years away. That’s two or three years” down the road, says Mike Campigotto, president of SafeSight Exploration Ltd. in North Bay.

“This is just the beginning of this sort of field” introducing the new technology into the underground mining sector.

Drones have been used for a number of years in open pits, but are a new player in underground mines.

“There are not a lot of companies in the game right now,” Campigotto says, with “no dominant player” in the industry.

“It’s important to work with operational mines” to make sure all the technology works as it’s intended, he says, in those specific circumstances.

But the three-year-old company, he says, is making itself known in the industry, getting information and feedback from the more than 70 mining-related companies operating in North Bay, and working closely with Newmont Goldcorp to transform the way things are done in the mines.

Already, the gold miner has four qualified drone pilots operating the machines in the surveying department.

The program embedded in Hoyle Pond’s survey team has taken LIDAR survey to the next level, SafeSight said in a news release marking the anniversary of the Hoyle Pond project. “Over the past year, our drone program has allowed our survey team to safely increase the speed, accuracy and capacity of our scans while the operator is at a safe distance out of harm’s way,” says David Poulin, Hoyle Pond’s chief surveyor.

“Weekly and, at times, daily flights helped us understand key functional requirements to ensure scans could be delivered in under an hour post flight, so that we didn’t slow down other elements of the value chain,” Jamieson McCausland, SafeSight’s lead robotics engineer, says.

Campigotto says the use of drones is a basic example of “replacing old technology with new technology.”

Drones using LIDAR, for example, can complete a survey of a stope or other working in 15 to 20 minutes, from the time the drone case is opened until the raw information can be uploaded to computers.

That provides 100 per cent coverage with a three- to five-centimetre variance.

With the old technology, the surveys could catch “60 per cent of the hole” from a stationary scanning unit mounted on bicycle-type tires, and the scanning process took about an hour.

“It makes (the workings) more accessible” with the amount of ore recovery quicker because of the more precise scanning.

Having a drone carry out the surveying work reduces the danger to employees, provides more accurate results and shortens the turnaround time of the data analysis.

The technology also is improving so quickly that it’s changing “almost quarterly,” he says.

It’s also gaining a “lot of interest” from players in the mining industry.

A big part is due to risk mitigation. Miners are able to see what is going on from a safe distance.

“Drones are starting to become a primary tool” that are “fast and safe” in an unfriendly environment.

They are also “really simple to use,” Campigotto says.

“Even I can operate them.”

He said in demonstrations at mine sites his company has “taken surveyors with no experience and had them fly in that setting.”

Campigotto founded SafeSight almost three years ago, bringing in a mining engineer, an electrical engineer, an aviation specialist, a geologist and a robotics and software engineer to have a full range of specialities at the North Bay offices to give the company the ability to handle all aspects close at hand.

He says the focus is “not to be research and development in drone technology. We wait for the leaders and integrate the best solutions.”

He points out that flying a drone in the tight confines of an underground mine is different from flying one in the open. Things like barometric controls and GPS don’t work underground, so the company had to develop proprietary sensors to give it the ability to do otherwise simple things like hovering.

Goldcorp, to his knowledge, is the only underground mine site in the world with its own operational drone program.

“Hoyle is the only one I know of that has integrated (a drone program) into its operational practices,” he says.

“I think it is the model of where the future is going.”

Jayne’s Cottages is a luxury Muskoka cottage rental and concierge company that offers a unique, personalized, safe and seamless full-service rental experience for both cottage owners and guest. The company gives cottage owners the confident to take advantage of the sharing-economy phenomenon, knowing their luxury lakefront investment is safe while they generate income and flexibility to pursue other endeavours. The company also helps customize the vacation planning for guests to meet their budget, lifestyle etc. Services include airport pick-ups, hiring local chefs, arrange boat rentals, local tours etc.

Jayne’s Cottages began in 2014 with 25 cottages listed and in 2019 there are over 160 properties listed on their website. Recently, Jayne’s Cottages received an OCE grant to work with Georgian College to develop custom software for her business. This software will allow her business to grow faster by being more efficient in all business and customer operations. This project will revolutionize the way property, hospitality and vacation providers operate and manage their client relationships.

IION’s client, Gincor Werx has united five companies under one flag and acquired the largest vocational up-fitter portfolio in Canada.

Having secured a position as Canada’s largest vocational upfitter with the largest portfolio of truck equipment and trailers in the country, GinCor is enjoying unprecedented revenue growth and plans to further expand its portfolio.

Between 2013 and 2018, the North Bay, Ontario-based manufacturer of vocational severe-service vehicles has reported a revenue growth rate of 412 percent due to rebranding and acquisitions – and plans for further growth.

“In general terms, we have every intent to continue to expand our portfolio,” says Peter Gould, Gincor’s chief commercial officer. “That’s the DNA of the company – to buy assets of other companies and integrate them into our business to create strong operational efficiencies and further expand the value proposition.”

“We were looking for an umbrella brand to bring all five companies together to create a nationwide footprint,” Gould says. “Now we have the largest portfolio in the industry. We are the only one in Canada with a national footprint and that is unique in our business.”

The company got its start in 1978 as Gincor Truck & Trailer Werx. A family business, it grew to become a leader in the vocational truck, trailer and service industry in Canada.

In 2016, innovative installation practices and a focus on continuous improvement led Gincor to expand its product offering by acquiring JC Trailers. A year later, the company rounded out an extended national sales, parts and service network and cemented a national footprint with further growth by the acquisition of Del Equipment.

“Our smallest facility is about 10,000 square feet and our largest is 120,000,” Gould says. “And within those there is installation space, service space and the majority have paint and sandblasting facilities.”

With more than four decades of collaborative experience and expertise in the custom manufacturing of vocational vehicles, Gincor Werx has a solid reputation for quality workmanship and technical innovation.

Its products include dump bodies, cranes, flat decks, roll-off hook-lifts, van bodies, heavy haul float trailers and work-ready snow and ice equipment. “In total, we probably deal with 3,000 vehicles per year,” Gould says. “That’s a combination of upfitting the vehicles and the manufacture of trailers.”

That largest chunk of the company’s business falls under the upfitting category. Gincor manufactures and upfits equipment for many construction companies, municipalities and other government entities as well as private businesses.

In addition, Gincor has relationships with chassis OEMS, chassis dealerships and world-class truck body and equipment OEMs. With a factory upfit, the truck is modified by the OEM while still at the original plant. But some OEMs will ship their trucks directly to Gincor for upfitting.

“We would be the largest in Canada from a partnership standpoint with the OEM dealers,” Gould says. “We have a pool stock with many of them.”

In May, Gincor launched a new website, www.gincor.com, that gives its customers a complete listing of its nationwide work-ready inventory. They can locate their work-ready solution by product, application or province.

With an extensive product portfolio, Gincor recognizes the importance of supporting its products after they leave its facilities. Gincor’s newest facility – located in Newmarket, Ontario – is equipped to service a vast array of truck body and truck equipment that Gincor supplies.

Over the years, the company has received a number of awards. They include “Business of the Year” from North Bay & District chamber of commerce, “Luc Stang Entrepreneur of the year” from the Northern Ontario Business awards and was ranked No.276 on the 2016 PROFIT500 list for Canada’s Fastest Growing Companies.

“We call ourselves Canada’s upfitter solutions,” Gould says. “Coast to coast, shoulder to shoulder, we’ve got you covered. A lot of companies only specialize in specific areas. But with our huge portfolio, if you need something, we probably have it somewhere.” 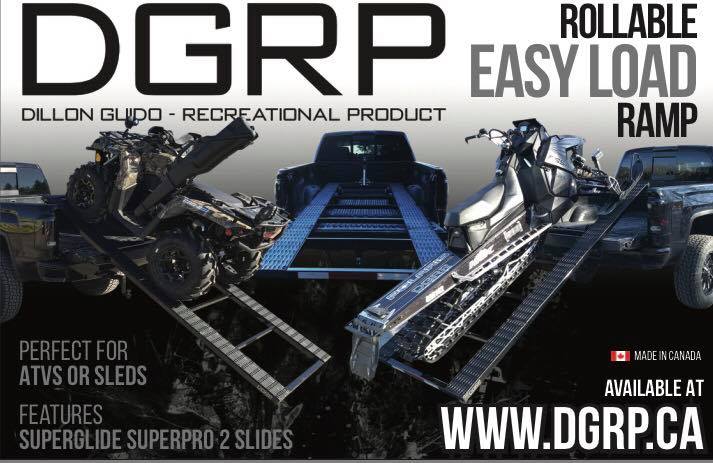 DGRP (Dillon Guido Recreational Product) is the manufacturer of the Rollable Easy Load Ramp for ATVs and sleds.

The ramp features a winch point to alleviate the stress some riders have when it comes to riding their ATV up a ramp and into their truck. With this product, you can slowly, and safely, winch your ATV up to the top of the ramp. This means no chance of tire spin or rolling backwards.

This ramp is completely non-mountable, in and out of the box within seconds weighing in at only 70lbs and engineered and stamped off for 1000lbs!
4×10 aluminum construction that works for sleds and ATVs. DGRP is also set up with customs/shipping for customers in the USA.

Rynz Innovative is located in Seguin, ON at the Airport Industrial Park and is is operating as an innovative full-service company where they focus on providing clients with a “turn-key solution” for their projects. Rynz Innovative works with companies from concept to completion; CAD design, 250-ton injection mold press through to commercial production.

Rynz Innovative Tooling has been in operation since 2008 and started out as a home based business. During this time, Rayner Haupt, the president of Rynz Innovative Tooling also spent six years teaching hundreds of students the trade of mold making at Georgian College. The business has had to adapt to the changing economy and the business plan has changed significantly since 2008. Rayner now works full time putting everything he has into the business.

Rayner believes in putting the customer first and is constantly looking for ways to innovate within the company to improve his efficiencies. He is continuously investing in new equipment to fit his customers’ needs and automating his existing equipment to allow for faster production to keep up with increasing demand.